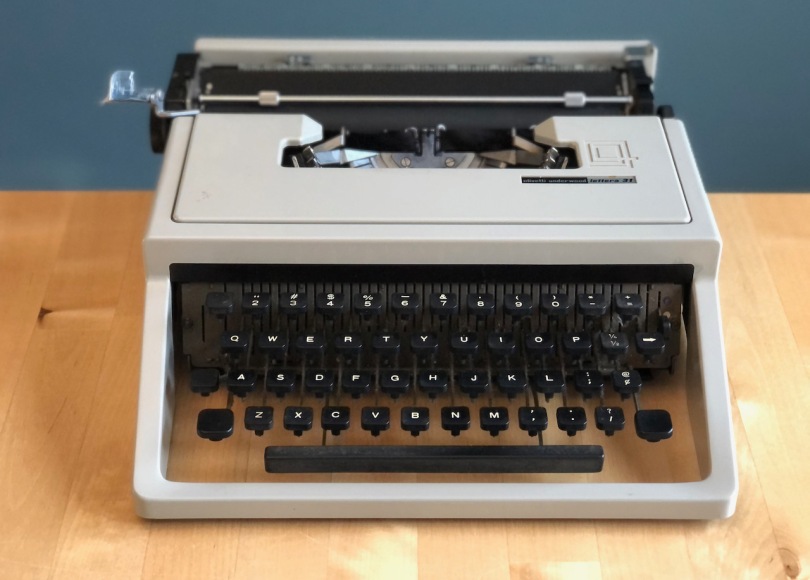 Wouldn’t you know it, as soon as I finished the Studio 45 review, up pops another Olivetti. This time it was the Lettera 31. I know, there are loads of other machines I could be getting my fingers on, but I couldn’t resist. After all, I’d ditched my trusty Smith Corona Sterling (1947) for a Lettera 32. It’s not like the Sterling was a slouch, but the Lettera was newer, easier, crisper and finer. Letteras are small, but big enough for lots of rough drafts. They fill the niche between portable and ultra-portable.

I like small typewriters, but shrink them too much, like the Hermes Rocket, and they’re just too dinky to bang out anything longer than script changes while on location in Monument Valley. You could travel with a Lettera, but its notoriously lousy zippered case is liable to stay shut or worse, come apart at the seams while at a brisk trot. No thanks. Keep it on the studio lot. But not so fast Bronco Billy, with the Lettera 31, Olivetti wisely discontinued the zippered mess of the Lettera 32. In its place is a single piece vinyl case. While it’s an improvement, it has no buckles, latches or locks to keep it shut.

I’m sure I’ll get bags of letters from the journalist jet-set praising the portability of the Lettera from Sri Lanka to Sao Paulo. Tell your cheap-skate editor to spring for a Rocket. Sorry, I digress. We’re reviewing a typewriter not the case.

If you haven’t read my praise of the Studio 45, get on it, because this Lettera 31 is cut from the same sheet of plastic. Plastic? Sounds cheap. It’s not. It feels solid. In fact, this Lettera 31 feels more solid than its metal clad predecessor the Lettera 32. If you’re confused by the numbering scheme, so am I. What company goes backwards with newer versions? I got it when they leapt a couple numbers from Lettera 32 to Lettera 35, but then back to 31? Strange. Leave the counting to the Swiss. The Italians should’ve never started numbering Letteras. The name was perfect just as it was. Even the number loving Swiss left the Rocket alone. I’m glad Hermes didn’t feel the need to append numbers to the Rocket, or else it might’ve ended up like that naming disaster of the 3000. Cases, names, who cares, right? How does it work? You’re right, compadre. Onwards.

One thing I love about Letteras, including the 31, is the distraction free zone. Nothing between you and your words. If you haven’t read my thoughts on this, pause the tape, and load this piece. The Lettera 31 offers an unobstructed view of your words hot off the slug. My only gripe, and it’s a biggie, as you type the page curls off the platen then disappears behind the typewriter. It doesn’t have paper supports! The Lettera 32 offers the best version of this crucial feature. Not only does it display the page, it does so at a smart angle that doesn’t leave you leaning over to see what’ve you written. Ok, Kerouac, just free wheel it and let the roll fly, no looking back, Jack.

Deal breaker? Perhaps, if the Lettera 31 wasn’t so capable. If you’re in the camp that feels the lightness of the Lettera 32 throws you off, and you want something with a bit more robusto, then the Lettera 31 might be your machine. It’s smaller than the Studio 45 and has the distraction free zone of the Lettera 32, but with a more solid feel.

Like the Studio 45, it’s not a looker. But under that bland exterior is an easy going and reliable typewriter. Just load a blank page and add your own flamboyance.