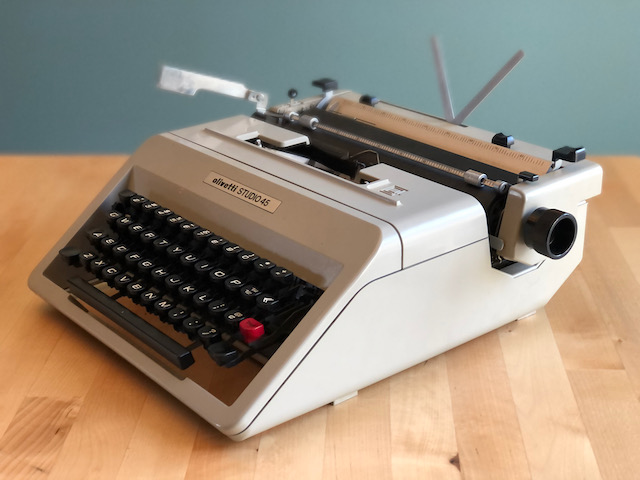 When I first started using Olivetti typewriters, I was drawn to their design. The modern shape. The colors. Their ads evoked a sense you were buying a work of art. Not only were they art, but writing on them was like art creating art. No wonder Olivetti used the word “studio,” as if a writer’s studio was contained in the shell of a typewriter. Even the aptly named Lettera series is a playful take on a familiar word. Poetic. That’s where it all begins, one letter at a time, making words, painting a picture, telling a story.

When I sit at an Olivetti, I feel like I’m tapping into a rich tradition of Italian artisans, where form is as important as function. But a great design only works if the typewriter is up to snuff. Sure, they’re nice to look at, but does it work every day, every letter, every page? With Olivetti, the answer is YES.

There’s a good reason the Studio 45’s predecessor, the 44 is near the top, only to be topped by the Lettera 32. My chief complaint with the 44 is that it doesn’t have the lightness of a Lettera. Which is OK, since it feels sturdy and reliable. The Studio 44 is no slip off your desk Slim Jim. Some prefer a beefier machine and for them the Lettera can feel flimsy. Olivetti even marketed the Studio 44 as a mix between the ease of a portable with the solid feel of an office standard. And they succeeded! But don’t be fooled, the big office standards, as I’ve noted in another post, are no slugs. There’s never a more demanding customer than an over-worked, under-paid secretary whose typing actually earns a living.

While the Studio 44 is a portable, if you’ve ever tried to tote one, they’re a lug. I must admit my curiosity for other Olivettis waned after putting the Studio 44 and the Lettera 32 in the Top Ten pantheon. There wasn’t much to improve, right? Boy, was I wrong. The Studio 45 hits the sweet spot between these two stalwarts.

The key tops on the Studio 45 are shaped like saddles, perfect for your digits to ride on. Whoever thought cupped tops were the right shape? Saddles, amigo, are the only way to ride. The Studio 44 is cuppy, while the Lettera 32 tops are flat. The saddle top keys of the Studio 45 perfectly matches the curvature of the finger. If the keys and bell are the notes of the page, the carriage return lever marks a repose in the composition. Again, Olivetti got it right with the Studio 45. It’s long, big and juts at the perfect angle for an easy catch. And once you catch it, the carriage is super smooth with just the right amount of weight and resistance. The Studio 44’s carriage always felt heavy, like you needed that giant paddle of a return lever to get it moving. And the Lettera 32 lever is small, easy to miss and the carriage is feather light that it feels like it might fly off the rails if you’re too frisky.

As for design, I love the cool blue and curves of the Studio 44 and the Lettera 32. While you can get the Studio 45 in blue, perhaps its boxier lines don’t inspire the same poster art advertisements. It’s a much quieter design. Elegant. Functional. The Studio 45 is the perfect blank canvas. If you’re looking for a reliable typewriter, I suspect a Studio 45 won’t let you down. Any off-the-shelf used one will probably be in fine shape. That’s a big reason why the Olympia SM9 sits at numero uno. Every one I’ve purchased has worked. No issues. No need for a gut rehab, nor spending more than you need to. In fact, I’d say the Studio 45 might even challenge the Olympia SM9 for top spot. It’s quieter, less mechanical sounding, softer, more muted, warmer. It should satisfy the writer who is looking for something a bit weightier than the Lettera 32, but still wants a responsive feel. It’s not as iconic, but hey, you’re getting a typewriter to write with not look at.

Get your fingers in the saddle of a Studio 45 and blaze a new trail.

p.s. — If you haven’t sent a page to One Typed Page, now is the season for giving! We’d love to hear from you!

Snap a picture with your phone, send the medium size resolution photo to : submissions@typewriterreview.com 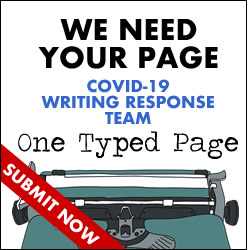