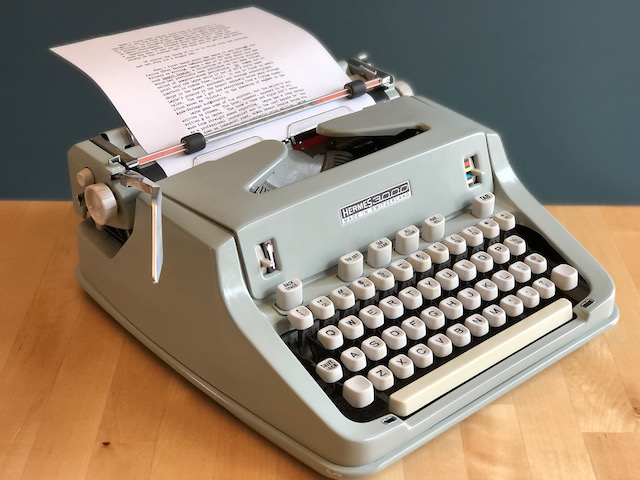 Seven years. That’s how long it has been since I reviewed the 3000. I’ve gone through stacks of typewriters over the years, yet the Hermes 3000 is one of the few that left a distinct impression in how it felt, worked and sounded. What’s more, it’s the type of typewriter that gets the juices going. A pre-1960s Erika is another dopamine fix. That’s why I keep an Erika 5 stashed away. While my Lettera 32 is where the work happens, that Erika 5 is a sweet diversion.

Is the Hermes 3000 still up to snuff? The one I got is the “New Version” as Hermes calls it. Really? C’mon, Hermes, that’s the best you could call it? The new version? Why not the 4000? Why Hermes ever went with numbers I’ll never know, when they had great names like “Rocket” and “Ambassador.” It’s too bad Royal had a typewriter called The Empress, because that’s what I would’ve called the 3000!

While the “new version” is more boxy than the original, the curves are still there, but more subtle. I may be going against the Hermes 3000 purists crowd when I say I was never fond of the bulbous contours of the original. The new version looks more elegant and refined, yet retains its distinctive style and color that you’ll never confuse it with an Olympia SM9.

Forget the looks, how does it work?

The typing action of the “new version” feels like what I remembered in the “original version.” They keys are big and cuppy, that it’s hard to miss a beat. The feeling is strong and assertive, producing a nice thunk thunk thunk sound. At first you might feel the need to punch the keys hard, but after playing around a bit with tapping the keys as light as I could, I was amazed how little effort was required to make a strong imprint.

What wouldn’t work with a light touch was the carriage return. It’s heavy. Good thing it has a big handle, because you’ll need all the leverage you can muster. Olympia SM-series and Olivetti Studio 45 & Lettera 32 have Hermes beat on this note. They fly! But hey, perhaps the slower return on the Hermes is by design, makes you pause and take in that beautiful line of prose before charging ahead into the next.

If you’re a frequent margin setter, setting them on the 3000 is a bit tricky at first, but super fast once you get it. Hermes calls them Visible Flying Margins. Gone are the clunky moveable margin tabs found in many other typewriters, in its place are a set of left and right levers that when depressed unlock the margin. Move the carriage to the desired margin location with the carriage release button, then release the lever to set it. Hermes has cleverly indicated the margin location on the paper bail with a red thermometer-like bar, making it The Visible Flying Margin!

Visible, yes, noticeable, not so much. If I hadn’t read the manual, I would’ve missed it. But once in view, it’s especially useful for the right margin, where instead of writing to the bell, you can see exactly where you’re at. I’m more of a write-to-the-bell-and-margin-release guy. I hate hyphenating. The Visible Flying Margin is useful for careful line planning so things are as neat and tidy on the right as they are on the left.

I’ve always struggled with knowing when I’m about to hit the end of a page. Especially when writing exactly One Typed Page! Wrap it up, amigo, you only got two lines left! Shoot for under, never over. To solve this problem, Hermes notched a couple openings on the lower part of carriage on the left and right sides. Through this gap, the bottom of the page comes into view a couple lines before the end. Olympia has the best solution for this with an adjustable page stop on the paper support, allowing the bottom margin to be set wherever. Either way, super useful!

Hermes is in line with an Olympia SM9 and Olivetti Studio 44/45. But it’s way more solid than either and has a distinctive feel and look that’ll beckon you to her keys. The downside, these babies usually go for double or triple the price and good ones are hard to find.

Finally, what makes the 3000 in its own class is the snap-on shell. It’s not like you’ll be tossing it in the caravan and dashing off to Marrakech, but useful for a quick snap-and-stash if your dining table is also your desk.

But if your desk is where it’s at, make it a throne and install The Empress, err I mean, The 3000! Long may she reign!