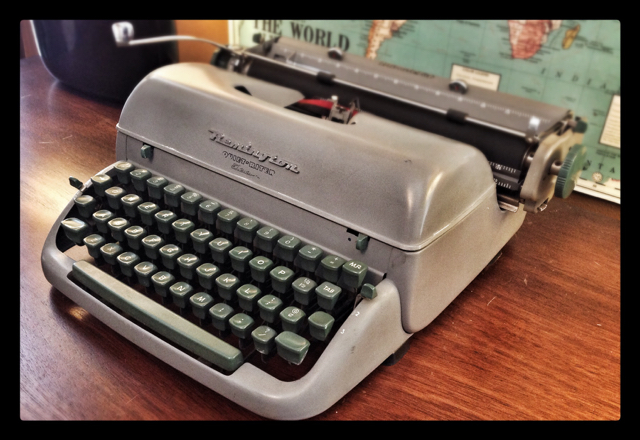 When you first look at the Quiet-Riter Eleven, you’re likely to think of post-WWII American design—its bulbous curves have more in common with a Hudson or a Buick than the sleek jobs coming out of Europe at the time. But don’t be fooled by appearances. Remingtons were prized for a reason. They flat out work. The Q-R 11 looks like it belongs in a GM showroom, but judging from its promotional literature, it was likely to be found in just about any American home.

Like the Smith-Coronas of the time, the Remington typewriter represents American simplicity at its finest. These are easy-going typewriters. Unlike their German counterparts of the day, they have the laid-back basket shift. The German-made Olympia might have a softer touch, but the heavy lifting needed to raise its carriage is an extra bit of work that won’t be required here. Plus, it’s been my experience that such constant movement of the carriage leads to upper- and lower-case alignment issues—when the carriage slams down, it hits a moveable stop that eventually needs to be adjusted. Good for the typewriter repairman, bad for you! If you’re looking for a dependable machine that will hold up for hundreds of thousands of words, get a Remington. Beauty is in the eye of the beholder, and the soft, utilitarian lines of the Q-R 11 might even inspire you when you’re using it for writing. It gets the job done!